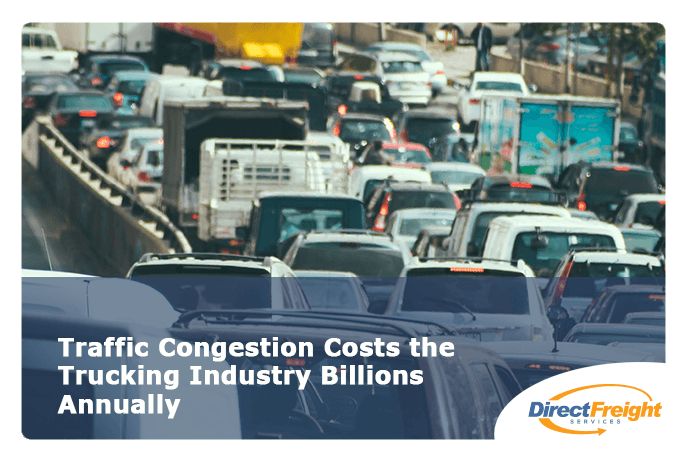 Nobody enjoys sitting in traffic, breathing in fumes, inching along at tortoise-with-a-limp speeds.  Traffic congestion is an increasing problem in the U.S. and is responsible for fender benders, pollution, and missed appointments, not to mention lots and lots of swearing.

Traffic congestion is much more than an inconvenience or an annoyance.  According to ATRI (American Transportation Research Institute), traffic congestion added $49.6 billion to the costs of doing business in the trucking industry in 2014.  For truck drivers, it’s not just a matter of burning through fuel, it causes problems delivering loads on time, increased wear and tear on trucks, and decreases the number of loads that can be taken, along with those ballooning fuel costs.  With the ever-growing population, and companies like Amazon driving a consumer expectation of two-day deliveries, more and more trucks are joining the traffic every day.

It’s a multi-faceted problem and its solution is equally complex.

What Cities Can Do

Adding more lanes to roads and highways may be inevitable but big government road construction projects that increase capacity for vehicles have become politically unpopular in an era where global warming has demanded we decrease carbon emissions.  Additionally, the results of these big road projects can be unpredictable. Boston’s Big Dig project which took 16 years to complete, cost state and federal taxpayers $15 billion.  By moving the interstate underground, drivers heading to the airport and those in the downtown areas saw some congestion relief, but drivers coming in the city from any direction still face daily stop-and-go traffic.  In fact, it’s been observed that when these road projects are complete, more drivers flock to these roads and abandon the alternative routes that they’ve been taking to avoid the original traffic resulting in congestion all over again.

There are numerous things that cities can do to help ease traffic instead of or in conjunction with road projects such as carpool programs, incentivizing public transportation, creating truck-only lanes, replace tolls booths with high-speed toll sensors, and use moveable median barriers to reverse lanes during peak hours.

What Truckers and Trucking Companies Can Do

While we look to government solutions, we must also look to truckers and trucking companies to take an active role in solving the problem.  The trucking industry has been focusing on technology to find better routes for trucks to minimize the amount of time spent sitting in traffic.

Some things that truckers can do to save fuel:

Fill up.  The fuller the tank, the better the mileage.

Avoid idling.  Turn the truck off whenever possible.

Cruise along.  Use cruise control when it’s safe.  Trucks are designed to run efficiently this way.

Keep tires inflated.  Regularly check tire pressure to make sure tires are not under- or over-inflated.

Don’t speed.  The optimal speed for saving fuel for trucks is 65 MPH.

Take it easy.  Speeding up and slowing down unnecessarily can eat up fuel.  Regulate speeds.

Limit A/C usage.  At lower speeds, open windows cause trucks to use less fuel than the A/C does.

Be more aerodynamic.  Make sure that the roof-mounted air deflector is adjusted so air flows over the trailer.

Use the right technology.  The right route-planning software can help truckers plan the most efficient route.

Direct Freight Services allows truckers to not only find loads but it also provides tools to deliver those loads as efficiently as possible.  By using the load board to fill return miles, deadhead miles can be minimized. The Direct Freight website also provides information on hazardous weather conditions that can slow delivery times, and the turn-by-turn truck-specific routing can make sure you avoid traffic without getting lost.

To see how Direct Freight  can improve your fuel usage, go to DirectFreight.com today!