Winter Blend Fuel, What You Need To Know 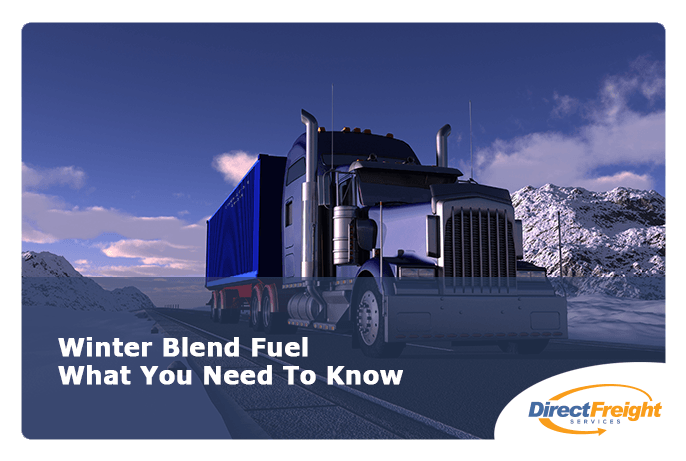 As the colder temperatures set in, most chain truck stops begin adjusting their fuel mix to protect engines from seizing when it gets so cold that fuel begins to gel.  The cold causes the paraffin wax in diesel to form crystals that won’t go through the fuel systemâ€•the tanks, fuel lines, or the fuel filter. The truck won’t run, nor will it be able to heat your cab which could be dangerous if you’re in the middle of nowhere when things begin to freeze.

Diesel comes in winter blend and summer blend.  Summer blend is straight diesel or 2-D which is what most trucks use under normal conditions.  Winter blend or 1-D should be used in the winter. Its ingredients keep it from becoming gel during colder temps but it has a lower butane content which causes it to not perform as well as 2-D.  This, and the fact that it’s more expensive than summer blend (as much as 50¢ per gallon more) is why it’s only used when necessary.

In very cold weather, drivers use as high as 80% 1-D but usually a 75/25 mix is used in colder temps and a 50/50 blend for near-freezing areas but usually, you won’t know what you’re buying at the truck stops as they mix it for the area where they’re located.

There are fuel additives that can be used instead of 1-D that help reduce freezing in the fuel line in and in the fuel filter and they’re also cheaper than winter blend, costing 1.5¢-3¢ per gallon.  Some additives can be used year-round and can also improve the truck’s fuel efficiency which can save money but generally, the colder the weather, the more additive is used.

Additives can thaw your diesel after it has begun to gel but by the time you start to feel like your truck’s fuel might be gelling as it begins to cough and sputter, the gelling has already begun in the fuel line and fuel filter too.  Putting in additives at this time means you need to remove the fuel filter to do it, sometimes changing it more than once, which can be difficult to do in freezing temperatures(especially if you’re broken down on the side of the highway).  Many of the bigger chain truck stops in colder regions winterize their own fuel as the season gets colder, and in some places fleet owners supply their drivers with an anti-gel agent to use on the road. If you’re going to travel in colder regions, carry additives with you before going into colder regions in case of an emergency.

Additives can have their problems as well.  If additives are overused, the fuel lines can become clogged.  This is why truck engine manufacturers put out recommendations on additives and trucking companies may have their own policies on fuel additives so be sure you know what they are in advance.  A winter blend of diesel is the most effective and safest treatment against gelling.

Truck manufacturers have been looking for ways to protect their trucks against gelling such as systems that prevent gelling like recirculating the fuel, fuel filters with an electric heat option, and in-tank fuel heaters.  These options can keep you from breaking down in dangerous, freezing temperatures and keep your load on schedule.

Direct Freight Services allows truckers to find loads and allows shippers and brokers to post their loads.  The Direct Freight website also has many useful features such as mile calculators, fuel price data, turn-by-turn truck-specific routing, and the latest weather conditions so you can be prepared for cold weather conditions.

To see how Direct Freight  can work for you, go to DirectFreight.com today!

IoT and the Trucking Industry 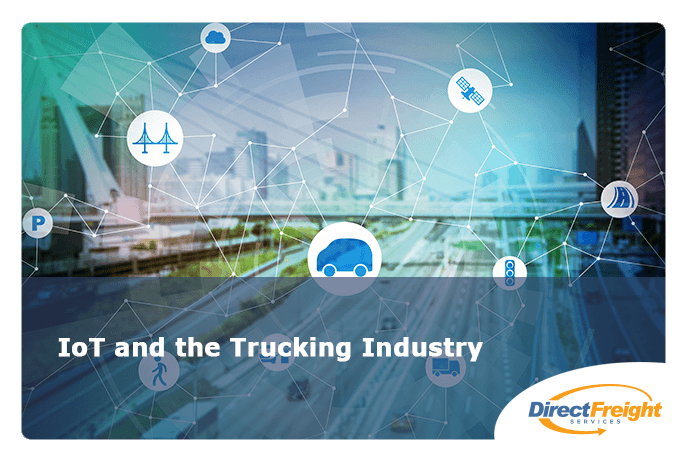 IoT, or Internet of Things, is a term used to describe a network of thingsâ€•devices, appliances, and vehicles, connected using wireless networks that can be utilized and monitored using the internet.  You may not think that there’s a network of things that connect us everywhere but every day we’re more connected than the day before. Virtual assistants like Alexa have become hugely popular in the last few years, as has home monitoring and security systems and health monitors like FitBits.  You can buy trackers to track everything from your child or pet to an elderly person who has Alzheimer’s. You can even buy a fridge with a camera that points inside so you can connect with it while you’re at the grocery store to see if you need milk.

IoT can be used to benefit or improve many industries, including the trucking industry.  Shippers, carriers, and drivers alike have been implementing IoT as a way to improve productivity, safety, and logistics.

ELDs are a requirement for all trucks.  They monitor a driver’s hours ensuring they’re aware and following the mandated Hours of Service and remaining in compliance with the law.  ELDs were made a requirement as a way to combat drowsy driving for the safety of drivers and anyone else sharing the road. At first, drivers weren’t happy with Big Brother watching their every move but  reality is that ELDs save drivers the time of filling out paper logbooks. ELDs that track speed and location can help dispatchers keep drivers on the most efficient, money-saving route.

Geo-fencing is a virtual fence that triggers an automatic response when a device enters or exits a specific location.  It’s an elaborate form of GPS that gives alerts if the freight is off course which could result in lost time and efficiency.

Smart tags are sensors that can be added to the freight itself that tracks the package in their simplest form or can provide more specific data like whether the package has been opened or tampered with as well as product temperature.  This is particularly important in the food industry for perishables and the biopharmaceutical industry where medicines and other biological materials have to be kept at specific temperatures at all times. IoT allows constant monitoring of freight so that drivers and management can be alerted to any changes in temperature that might compromise the cargo.

There are many different sensors that can be used on trucks.  Engine and tire data can be used to detect a small maintenance problem before it becomes a big, expensive one.  Tire pressure being too low or too high or engine issues can trigger an alert that can avoid a blowout or breakdown.  Accelerometers, fuel sensors, tracking, and other sensors can provide vital information to allow the truck to deliver its goods safely and on time.  Sensors can provide real-time alerts to hazards or delays and can improve fuel consumption which not only saves the company money on fuel costs but it can also help reduce CO2 emissions which is good for the environment.  Better communication between shippers, carriers, and drivers allows everyone to be on the same page and with new technologies ever on the horizon, current IoT solutions are just the beginning.

Another technology used to streamline the shipping process is load boards that allow drivers to search for available loads or for shippers to search for carriers or drivers.  Direct Freight Services is a web-based load board that has many helpful features like full credit reports, load filtering, payment expectations, and broker authority information.  Whether accessed online or now through our easy-to-use Direct Freight Driver app, Direct Freight helps you find the right loads. Go to DirectFreight.com and start searching for those high-quality loads today!