What is the economic impact of the trucking industry in the United States? 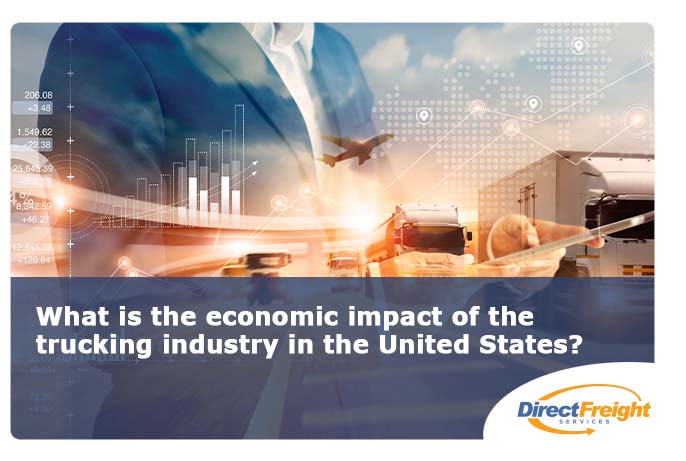 The United States has one of the strongest economies in the world and much of its rigor is powered by its incredible logistical network that allows goods to be transported across the nation rapidly and efficiently. After the creation of the interstate system in the 40s and 50s, the trucking industry took hold on the nation by creating thousands of jobs and providing the means for reliable transportation. The United States economy depends on the stability and dependability of its transportation system.

Money is on everyone’s mind. It is even more salient to economists who have analyzed the United States economy. With a quick look at the statistics, one can see that trucking is big. It takes up over 70% of the transportation industry, and recently, yearly revenue has exceeded $800 billion through completed deliveries. That’s over 11.5 billion tons of cargo each year, according to TheTrucker.com. Beyond the direct economic impact lies the impact of stores and distributors selling the goods that were transported. CFS reports that as of 2017, 71.6% of goods in the United States were transported on a truck before reaching their points of civilian distribution.

The trucking industry touches many different aspects of American life, from groceries, pharmaceuticals, household goods, to cars and building materials. America truly runs on trucking. The economic impacts of trucking are also able to be quantified in terms of employment. Trucking is a great career for many people, and there are drivers on the road today from nearly every walk of life. Trucking used to be a career predominately reserved for men, but now anybody can have a successful career driving!

In fact, there are around 3.36 million drivers on the road in the United States today, of this number, about 6% are female drivers, but this number is increasing yearly! Additionally, nearly 10% of drivers are veterans who have found fulfilling careers after serving the United States in the Military. Professional drivers make on average over $60,000 per year, which is nearly twice the national average income according to Census estimates. This access to a lucrative career is great for the economy because it means drivers are self-sufficient and able to purchase and invest in what they need.

The transportation industry is one of the driving forces of the global economy. The presence of an interconnected network of supply, demand, and transit allows a free flow of capital that can instill economic growth. Trucking is a major part of this network, especially in larger nations like the United States. As we continue in time, it is expected there will be more need for drivers as the trucking industry is expected to grow. The zenith of the economic impact of trucking is yet to be seen.

Drivers are the lifeblood of the United States and its economic power. The incredible logistical system that allows goods to be transported from pickup to drop-off is part of what makes the United States such a wonderful place to live, and drivers are the most important piece of the economic puzzle. The economy is still recovering after the pandemic, but it is already looking like it will reach even greater heights than before and drivers will be crucial in building it up!

History of the Trucking Industry Within the United States 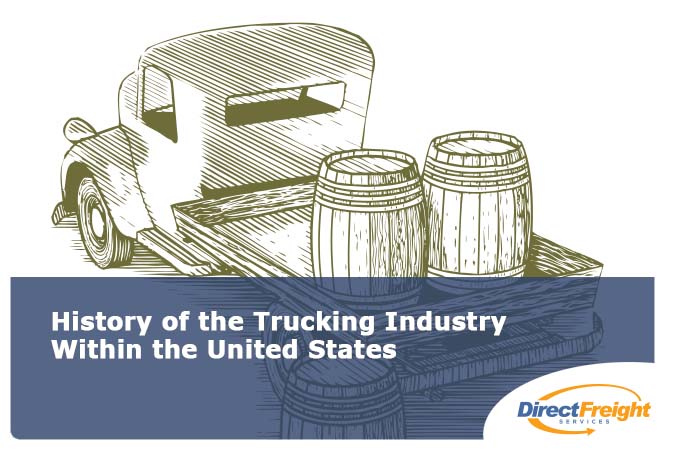 Since the semi-truck was invented in 1898 by Alexander Winton, the American Trucking Industry has rolled on and been driven to incredible heights becoming one of the largest and most important industries in the United States. American Trucking has survived dark times, always lighting the way to a better and brighter future for the industry and for America as a whole. The story of the trucking industry is one of perseverance, triumph, and improvement, and this spirit persists to the present.

We have already discussed the history of the semi-truck in a previous post that you can check out here, but the story of the industry built around the machine is equally as interesting. The first commercial semi-truck was built as an answer to the increased need for the transportation of goods across the country. The first major use of trucks was by the military in World War 1, though after the war, the increase of paved roads across the country made it possible for the industry to take hold for civilian purposes in the 1930s. Once the industry was well established, it became subject to regulations as it and other occupations began to grow and expand.

20 years later the interstate system in the United States was created, allowing for easier and faster national transport of goods. This allowed for major expansion and improvement of the trucking industry, making it more reliable and efficient. The advancement of temperature-controlled trucking, first invented in 1925, but improved upon greatly in the 40s and 50s allowed for the safe delivery of pharmaceuticals and food products as well.

In the 1960s and 1970s the American Trucking industry became more prevalent in the public eye with many songs being written about it while gaining incredible popularity. There was something about the subject matter of trucking songs, the long coast to coast drives, traveling through wide open spaces, and the struggles that drivers faced that greatly touched the American public. During the early 70s, the trucking industry took a major hit when the energy crises of 1973 and 1979 incited protests and strikes by many drivers who were upset by rising fuel prices.

In 1980 the Motor Carrier Act was passed by President Carter. The Act decreased the governmental regulations on the industry which allowed owners of fleets and individual drivers more liberty in the management of their business. President Carter said this about the act: “This is historic legislation. It will remove 45 years of excessive and inflationary Government restrictions and red tape. It will have a powerful anti-inflationary effect, reducing consumer costs by as much as $8 billion each year. And by ending wasteful practices, it will conserve annually hundreds of millions of gallons of precious fuel. All the citizens of our Nation will benefit from this legislation.”

Now and the Future

The trucking industry has come to dominate the United States transportation industry, replacing the horses and carriages of the previous centuries, long lines of trains, and even exceeding air transport in volume and efficiency. Now the trucking industry is entering a new era with the rest of the digital age. There are now online blogs about trucking, websites and magazines that allow drivers to communicate with their peers across the world (like you’re doing right now), and the rise of electric trucks and self-driving vehicles. The trucking industry is still growing and changing, and its future is incredibly bright!