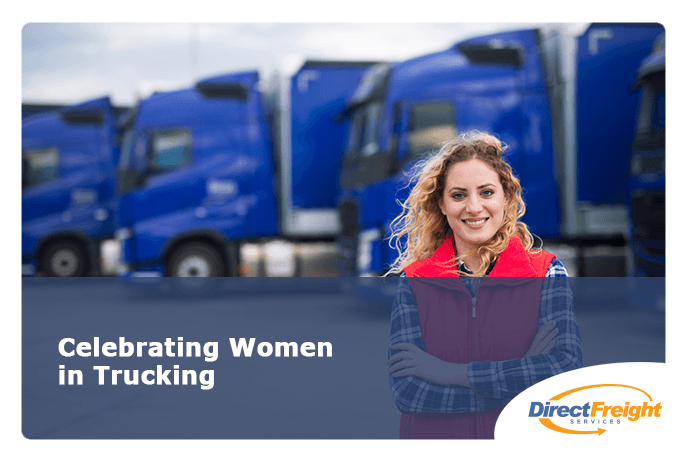 When it comes to driving big semi-trucks, what do you think of? Many people automatically think of blue jeans, flannel shirts, ball caps and beards. All trademarks of a trucker, right? Not hardly. There is more to being a truck driver than those things, and women today are making

As of April 2019, there were 3.5 million truck drivers in the United States, and of those, 7.89% were women. This may be a low percentage due to a variety of factors, one being the fact that many women have a family to raise and would therefore be sacrificing their time away from them. However, that does not mean that truck driving is a men only profession. Not only are some companies encouraging and recruiting women to become truck drivers, but women themselves want to get behind the big wheel.

Women make contributions to the trucking industry, including being 20% less likely than men to be involved in a crash. According to Ellen Voie, the CEO and founder of the nonprofit Women

in Trucking Association (WIT), carriers often tell her that women take better care of their equipment, are easier to train, and have outstanding customer service and paperwork skills. Women are also statistically 45% less likely to participate in logbook violations and 60% less likely to commit hours of service violations. There are many positive benefits for women truckers. One major benefit is equal pay. Trucking companies do not pay their employees based on their gender, age, or ethnicity, but rather on mileage or the load of the percentage. Therefore, women receive competitive pay and benefits that trucking companies offer to their male counterparts. The mean wage for a commercial truck driver is $42,500 and women have more opportunity for advancement into management positions in the trucking industry than others. Female truckers also have a community of other women who are in the trucking industry to connect with. Besides WIT, which encourages the employment of women in trucking, promotes their accomplishments, and decreases obstacles faced by women working in the trucking industry, REAL Women in Trucking is also a huge advocate. This organization provides their community of readers with information and support to educate women who want to have a career in trucking and to improve the lives of those who are already truckers. Family passes are also becoming popular among trucking companies. These family passes allow truckers to bring their spouses, children, or pets on the road with them.

Being a truck driver isn’t easy for women. They have to face hardships such as leaving their family behind at home, sexism, lack of female accommodated truck stops, and safety issues. Safety concerns are one of the most common issues, and not just for women. Some of these

concerns include poorly lit loading docks and being pushed to drive in inclement weather. Organizations such as WIT are working with truck stops to improve safety and recommending changes such as improved lighting and additional security guards. WIT also hosts self-defense classes and works with truck manufacturers to install safety alarms and ergonomic additions for female truck drivers in their cabs. Many trucks are designed and built for someone of a larger stature than the average woman. This can make for an uncomfortable drive which can prove to be a challenge when you are on the road for 10 hours or more. It is also likely that women truck drivers may encounter harassment due to this being a male-dominated field. To help with this, truck driving schools are providing female-led training for women who are new to the profession.

Not all women who are in the trucking industry are drivers. There are many women who are behind the scenes that work to make sure female drivers are being advocated for and who make sure their female drivers are safe out on the road. Women who work behind the scenes have careers in management and are trainers and advocates. There are even women who own their own trucking companies. No matter what type of career a female has in the trucking industry, it is an important one in order to encourage women to become truck drivers.

The staff here at Direct Freight Services knows the importance of having women drivers and the things they can offer the trucking industry. Even though there is a shortage of female truck

drivers and it is a male-dominated field, that doesn’t mean women shouldn’t be celebrated. Whether it is driving a big rig across the country or working behind the scenes, women who work in the trucking industry care deeply about their job. They work hard, encounter many hardships, and sacrifice their time away from their family. Now that’s something worth celebrating!