2021 is the year for electric trucks. What does this mean for the trucking industry? 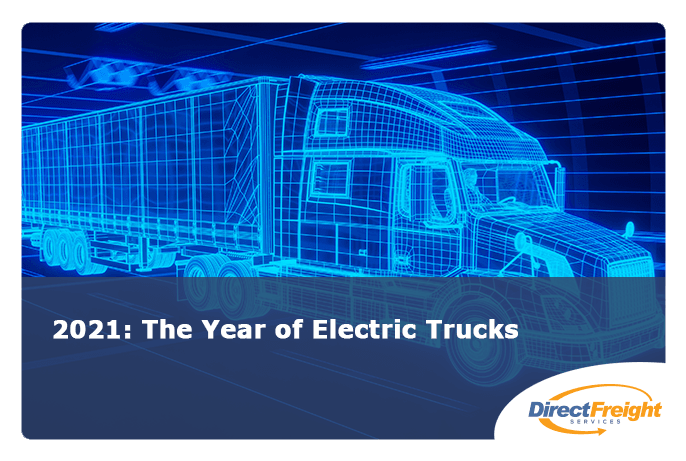 Electric vehicles are far different from most conventional vehicles in the United States. Most cars, trucks, and even planes run off fossil fuels. Instead of combustion engines, electric vehicles use rechargeable batteries (in various formulations, though lithium-ion batteries seem to be the most popular) to power motors. Until the 21st century, electric vehicles were mostly niche, short-range contraptions that were yet to fully pass public scrutiny.

With the rise of mainstream automotive companies making hybrid and electric cars, there has been an upsurge in public trust of these vehicles. A major player in the electric vehicle industry is Tesla. So, what is the benefit of electric over gas? There are actually quite a few benefits for both the consumer and the environment. Electric vehicles do not require fuel to recharge, so they take advantage of a power source in either your home or an electric vehicle charging station (this usually costs about $9 to fully charge an electric car, making it much cheaper than conventional fuel). Also, they do not emit fumes and gases into the atmosphere which is beneficial from a climate conscious standpoint, as well as preventing traces of lead and other heavy metals from entering the air, soil, and waterways.

The Way of the Future?

Average electric trucks are currently only equipped with about 300 miles of range, at maximum, so they are still a ways away from becoming the sole vehicles of the transportation industry. However, most of the trucking in the United States is performed fairly locally, and electric vehicles shine in short-range transportation. Along with no major fuel costs, electric trucks are also less prone to breakage due to the fact that there are not as many intricate moving parts as in the engines of conventional vehicles.

This reduction of necessary repairs and replacements will save time, stress, and money which will allow drivers to transport more goods more frequently. While this will certainly be a cheaper model for companies to adopt, it will be a challenge to ensure there are enough charging ports at stations. All things considered, electric vehicles will not likely take over as the sole mode of transportation just yet, as there are many improvements and innovations to be developed.

Electric vehicles are becoming more popular, but there is no doubt that the trucking industry will persevere since people depend on this intricate system of transportation to receive the goods that they need. There will certainly be challenges as the industry shifts to adopt a more electric-friendly mode. These challenges will be worth it, due to the reduction in repair times and costs for the vehicles. The trucking industry should be excited about the potential benefits of going green, as this will be a cheaper and more sustainable model in the long run.

What will self-driving trucks mean for truck drivers? 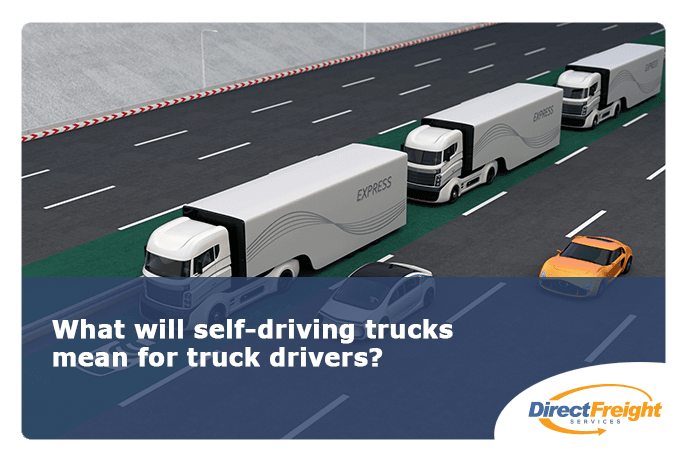 Who is driving that truck? The answer may be nobody. It’s a strange thought for most people since vehicles have been operated by a driver for as long as they have existed . There seems to be something odd about a driverless vehicle, but unlike wild horses before being trained to pull a buggy, these autonomous vehicles are strongly regulated and programmed for safety before they are allowed onto the road.

The idea of autonomous vehicles is concerning to people in the industry, especially those who are employed as drivers, as these vehicles could potentially pose a threat to their jobs. This fear is currently not warranted though, as most autonomous vehicles in production require human intervention and supervision. It is impossible to replace human intuition with a machine. While there are certainly more autonomous vehicles than there ever have been, there is no doubt that truck drivers are still important and will remain important pieces of the United States economy, despite an increase in vehicle autonomy.

The first self-driving vehicle was produced in 1958 by the General Motors company which was “guided by radio-controlled electromagnetic fields generated with magnetized metal spikes embedded in the roadway” according to TitleMax.com. Self-driving vehicles now work differently and are controlled by a series of sensors, cameras, processors, and programs that detect and interpret real world data while navigating through the obstacles and pathways of the world.

Self-driving vehicles are not a one-size-fits-all innovation. The autonomous capabilities come in a variety of constraints from levels 0-5 with 0 being a non-autonomous vehicle, and 5 being a fully driverless (and without a steering wheel) vehicle for all conditions, according to Synopsys.com. The majority of newer vehicles are actually in the level 1 category of autonomy with lane control and parking assistance. There are currently no level 5 vehicles on the road as of yet. Reports are mixed on the timeframe for these vehicles becoming a reality.

Self-driving vehicles do pose some benefits, especially in the safety and continuous transport sectors, as they do not suffer fatigue or require breaks from service as human drivers do. This continuous service could definitely save time and reduce the potential for accidents and mishaps on the roadway, but this technology is currently imperfect and cannot function on its own. However, with the supervision of an experienced driver, the machine and human effort working together could potentially create a smoother trucking industry.

What About the Drivers?

There are currently level 4 autonomy rated vehicles being tested for service right now, but it is important to note that these vehicles are not entirely driverless. While they can manage speed, navigation, and traffic for the most part, when conditions become more challenging, they still require the help of a human driver. It is not expected that level 5 trucks will become available any time soon, and even when they are, it will likely be required that a human operator be supervising their navigation and speed.

In short, drivers will never be able to be fully replaced and autonomous vehicles don’t pose a real risk to their job security. The demands of the career may change, and it will likely be that your foot may not have to always remain on the pedal or your hand on the steering wheel, but your input and service as an operator will be valued and needed for the foreseeable future. You still have a major role to play in the industry, so it’s not time to hang up your keys just yet!