Can truckers refuse to drive in bad weather? 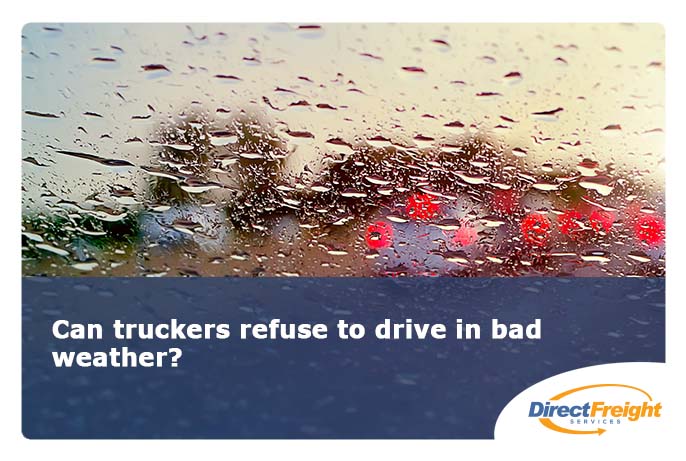 The cold and harsh weather conditions begin to arrive before winter officially starts on December 21st. Icy roads, snowstorms, and powerful blasts of wind are conditions that drivers across the country may face when the colder months roll around. Sometimes these conditions are incredibly harsh which leads to the question, can a driver refuse to make a trip if they believe the conditions are too hazardous? This is a dilemma that has faced drivers for a long time. Not only will it mean that this trip will be delayed, but in the past drivers have had the real fear of losing their jobs by refusing to drive.

Winter roads are brutal, especially in the Midwest and Northern parts of the United States. 17% of all auto accidents occur in the winter (National Highway Traffic Safety Administration). This doesn’t seem like a huge percentage but considering that less people are out driving during the winter, this is a rather high rate. Ice, slush, and snow can cause very dangerous accidents especially at high speeds because friction between the tires and road surface is greatly reduced which results in braking becoming somewhat ineffective. Drivers know this better than anyone else, when winter comes around the roads become far less friendly.

For a long time, winter weather and subsequent road conditions were unpredictable. However, in recent years meteorologists and weather forecasting technology have improved greatly, and are always learning more and getting better at what they do. This means that now weather forecasts are more accurate, giving drivers empirical evidence to support their reasoning for refusing to drive.

The Voice of the Driver

Drivers are the force that power the transportation industry, but traditionally they have not had enough representation in front of their employers. This can be especially obvious in situations where there have been commercial vehicle accidents on hazardous roads. For these situations to be avoided, the Surface Transportation Assistance Act (STAA) was passed. The Act prevents employers from firing or disciplining drivers based on a reasonable refusal to drive on hazardous road surfaces.

Most companies understand that drivers rely on transporting goods for their careers and that they would not refuse to drive for any unreasonable rationale, so hopefully companies are understanding when a driver refuses to drive based on evidence from the news, radio, or even their own eyes. If a company does take action to fire a driver, the driver can stand up for themselves in court and if they have sufficient evidence to support their reasoning for not driving (freezing rain, snowstorms, black ice) they will likely win their case.

The STAA was put into place to protect the rights of the driver and ensure that they stay safe in dangerous conditions. As a driver, you reserve the right to decline to drive if you have sufficient reason to believe that it would be hazardous to you or others on the road. This is crucial to keep in mind as we begin our journey through winter and colder days. As you drive through the winter, stay safe, stay warm, and know your rights.