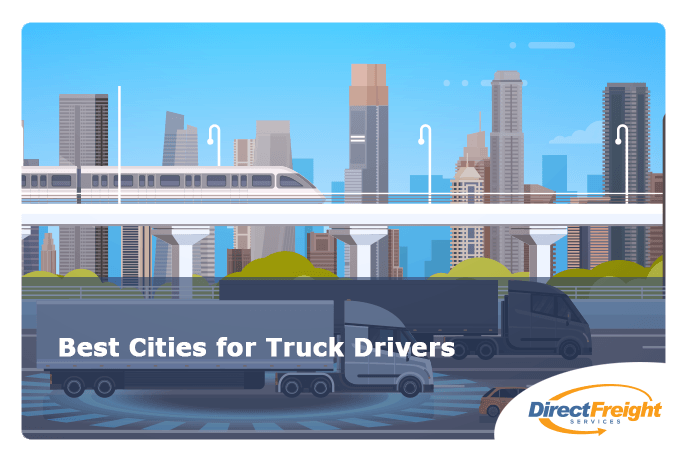 Maneuvering your car around during rush hour traffic can be a real test of patience and self-control. Now imagine what it’s like for a truck driver towing a trailer through city streets. Challenging at best, driving a truck through a city full of vehicles driving every which-way is like walking through a maze of anthills without stepping on any ants.
In some cities, drivers can get much better pay for having the driving skills to deliver goods safely, on-schedule, with traffic, limited parking, and loading docks that are seemingly impossible to back into. It’s really no wonder drivers can demand higher pay.

Advisorsmith looked at small (<150,000), medium (150,000-500,000), and large (500,000+) cities to determine the best cities for truck drivers who are looking for jobs.
Joplin, MO came it at the #1 mid-sized city (although its population is roughly 50,000 people, Advisorsmith included Joplin’s surrounding counties that give it a metropolitan area of 210,000). It’s located right on Route 66 and the proximity to railways and major trucking routes, number of trucking lines headquartered there, and a 21% below-average cost of living rate makes Joplin an ideal home for truck drivers. The average salary for drivers in Joplin is $42,060.

Danville, IL was #1 for small cities. Danville sits between Chicago, St. Louis, and Indianapolis and is at the center of 4 railways and several major trucking routes. With its low cost-of-living (27% below average) and high average driver salary ($54,770), Danville is perfect for drivers looking for jobs.

Fayetteville, AR, the 3rd largest city in Arkansas, is #1 on the list for big cities. It’s within 30 minutes of Walmart’s HQ, close to busy trucking routes, and offers 3x the number of trucking jobs than the U.S. average. The cost of living is low (13% below average) and salaries for truck drivers average $48,790.

While some major cities may have a higher average income such as New York City with the average driver earning $56,346, the expense of living there uses up a lot of that higher salary.

Traffic congestion is not just a huge headache for truck drivers, it’s costly, adding $74.5 billion in operational costs to the trucking industry annually. Every minute that a truck sits in traffic is lost productivity. Some cities are better than others when it comes to traffic congestion. According to the Fiscal Times, the three cities with the least traffic are Dayton, OH with 10 extra minutes of travel time per day due to traffic, Knoxville, TN with 11 extra minutes, and Omaha, NE with 13 minutes of extra driving time.

As most truck drivers know, older cities like Boston, MA, New York City, and Philadelphia have narrow streets that were built for horses and carriages. Although they have charm, they’re notoriously difficult for drivers to maneuver. Cities that saw later growth generally have wider streets that are easier to traverse.

Wallethub ranked the 100 biggest U.S. cities to drive in by looking at traffic, infrastructure, and safety and other factors. Their list ranks cities for drivability for all vehicles, and Raleigh, NC, Orlando, FL, and Lincoln, NE topped the list.

Direct Freight Services is a full-service load board that allows truckers to find loads and companies to post their loads. The Direct Freight website also has many useful features such as a mobile app, mile calculators, fuel price data, weather conditions, turn-by-turn truck-specific routing and more.

To see how Direct Freight can work for you, go to DirectFreight.com today!